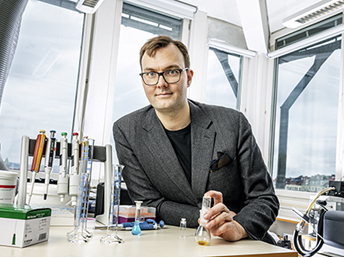 The MOST project coordinator, Kasper Moth-Poulsen, receives the Göran Gustafsson Prize “for the development of molecular energy storage systems“. The prize is considered as one of Sweden´s largest, for researchers. Moth-Poulsen is Professor at the Department of Chemistry and Chemical Engineering at Chalmers University.

“To be awarded the Göran Gustafsson Prize means a lot to me. It shows that one has done something good, and it is nice to be noticed for that“, says Kasper Moth-Poulsen in a press release from the Royal Swedish Academy of Sciences.

The advances of his research team in the storage of solar energy, the basic idea of the MOST project, have been specially considered for this prize. How we can store energy from the sun is one of our big problems for a sustainable future. Kasper Moth-Poulsen believes that he has found part of the solution. His group of researchers at Chalmers has developed a specially designed molecule that can capture the energy from the sun’s rays and emit it as heat much later. When the molecule is hit by the sunlight it changes shape into an energy-rich isomer that can be stored. By using the molecule in a window film, it may be possible to heat homes and have a comfortable indoor environment, throughout the day. With the help of the MOST solar energy storage system, which the research group has developed, it is possible to save energy for up to 18 years.